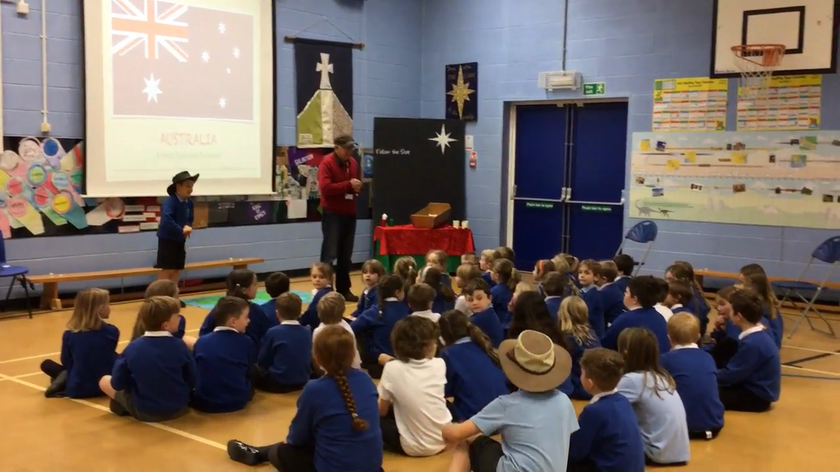 This afternoon, we did all things French!

Different stations were set up around the classroom.

At the research station, the children learnt about the different areas of France, famous landmarks, food and drink, currency, languages spoken, the French flag and finally, the population.

At the baking station, the children made traditional French butter biscuits; Sables.

At the art station, the children learnt about famous French artists; Paul Cezanne and Claude Monet. They had a go at creating some of their most recognised pieces (Cezanne’s still life fruit and Monet’s lily pads).

It was a fantastic and fun filled afternoon.

Our around the world tour began with a trip to an airport.

Many of the children in Class 3 hadn’t travelled by plane before so we created an airport experience for them in the classroom.

The first station was a check in desk. The children handed their passports in to be checked, and were then given their boarding pass.

This was followed by the luggage weigh in desk, where the children weighed their bags in order to receive a luggage label. Some of the children received fines for exceeding the weight limit!

The children then made their way over to security to get their bags checked, before arriving in the departure lounge for a much needed drink and biscuit!

It was then time for the children to board the plane and get seated before the flight safety video was played. Excited, the children then watched a flight simulator video which gave them a realistic insight into the taking off experience!

Can you name all of these world famous landmarks? We are over the moon with the finished result!

A presentation about Pakistan by one of the pupils in Class 3. We had a great time learning about all his family who still live there.

One of the pupils in Class 3 spoke to the class about his mum’s time spent in Australia! He even brought in a photograph. Thank you!

Postcards from all over the world!

We were sent so many wonderful postcards over the summer. Today, we enjoyed reading them all and locating them on a world map. Thank you to the families that sent them, it is greatly appreciated from all of us in Class 3. 😀
Top

Unfortunately not the ones with chocolate chips.

Some cookies are necessary in order to make this website function correctly. These are set by default and whilst you can block or delete them by changing your browser settings, some functionality such as being able to log in to the website will not work if you do this. The necessary cookies set on this website are as follows:

Cookies that are not necessary to make the website work, but which enable additional functionality, can also be set. By default these cookies are disabled, but you can choose to enable them below: